SAN JOSÉ — A team of geneticists from the University of Costa Rica announced this week that they have identified the gene responsible for Liguitism, or the condition of being a Liguista, and suspect the discovery will one day allow for programming of embryos for football club affiliation.

“This is a monumental day both for science and for Costa Rican football,” said lead researcher Dr. Dennis Mata. “and no one could be happier about this find than me.”

Mata was tragically born Saprissita into a Liguista family. His condition caused family hardships and even held him back in colegio. At age 16, after an intense clásico, he was disowned by his father and forced out of the choza. 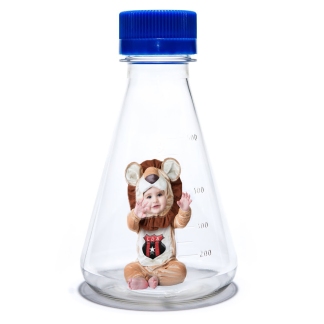 “Dad always suspected that I was the bastard son of Cuty Monge and would keep me locked in a cage with nothing to eat but a few slices of Bimbo,” said Mata sporting his purple lab coat. “The isolation really made me feel like some kind of monstruo.”

Dr. Mata wants to make sure no one goes through the same experience and believes his research will eventually lead to predetermined affiliation, or designer FC babies. In theory, parents will be able to choose their baby’s disposition towards any given team before conception via in vitro fertilization.

“The process would be similar to the gender selection techniques being done by fertility clinics in the US, the UK or Mexico,” said Dr. Mata between sips from a la Ultra mug. “All we need is a donor egg from a woman with Liguitism. Even if the baby’s mother has Saprissal palsy, or some other genetic club condition, we can guarantee children being in la Doce long before they turn doce themselves.”

Though in vitro fertilization is now legal in Costa Rica, President Solís has said he is hesitant to extend the law to include gene manipulation.