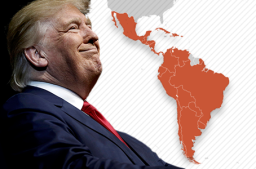 A New York Penthouse — For years, Latinos have insisted that they are also “Americans.” Now, US President Donald Trump plans to fine them each time they use the term.

Latin-Americans have well-known fury from being excluded from the “American” membership. Each time a US citizen identifies as American, the resulting argument is more intense than deciding which abuela makes the best tamales.

“We’re Americans, too!” Rocio Rodriguez proclaimed as she flaunted her Ropa Americana coupons. “Everyone from Canada to Tierra del Fuego is considered so.”

Trump described it as “unbelievable” and announced a directive to put a stop to the exploitation.

“This misassociation has gone on for far too long,” the president said as he granted Milo Yiannopoulos citizenship and gave him Washington D.C.’s key to the city. “If people want to be part of us, they have to pay for it.”

When questioned on how he plans to track the word’s use over such a vast continent, the president ignored the question completely and asked everyone to check out his new shoes. When pressed further, he said the economic gains would be “yuuuuge” for the already affluent.

In response to the order, “Todos somos Americanos” signs have popped up in lackadaisical protests across the continent. “Those pinche gringos aren’t the only Americans around,” severely overweight Gavin Hernandez shouted while finishing off a 10-piece KFC bucket in San Jose. “We’re all the same!” chants also emerged in Buenos Aires from marchers with maps simultaneously showing “America” as one continent and Africa as a single nation.

Domestically, trickle-down effects of the order have also started to resonate. When Houston native Monserrat Lopez was charged double at a local Starbucks, she was left perplexed. “I wasn’t even thrown off that they had written ‘Monster Truck’ on my coffee cup,” she lamented. “But when the barista told me it was because I ordered an ‘Americano,’ me volvió loca.”

Lopez is far from the only victim. Over the past few weeks, Latin-Americans have seen interest rates on their American Express cards increase drastically, discounts on skinny jeans decline at American Eagle, and hash browns virtually disappear from their American Slams at Denny’s.

“I even had American Chopper erased from my PVR,” an angry Pedro Badilla revealed as he cried sitting through Canadian Idol. “Taking away the American dream was enough.”

Not able to focus on something for more than a few seconds, President Trump also hinted towards future proclamations. These are rumored to include shipping Alec Baldwin and Meryl Streep to a newly-minted resort in Guantanamo Bay, creating a fake news registry that includes every reputable reporter on earth, and launching his own feline rescue site called “grab ‘em by the pussy.”