SAN JOSÉ — Two weeks ago, at the International Court of Justice in The Hague, Costa Rica filed a complaint against Nicaragua regarding the military occupation of Isla Calero. At about the same time, the government closed the ill-famed Platina, the bridge spanning the Virilla River, with promises that it would “eventually be replaced”. If this all sounds eerily familiar, you are not alone. According to a recent study, like the other 4.8 million people living in Tiquicia, you may be trapped in in a temporal loop. 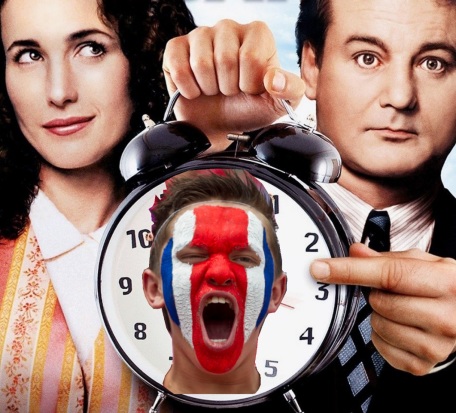 A temporal loop, causality loop, or The Groundhog Day effect, is the phenomenon of repeating a specific span of time over and over due to a rupture in the space-time continuum, and Dr. Bill Murillo of the National Department of Space-Time Studies believes that some unknown event in Costa Rica has caused such a rupture.

“We’re still not sure what action or actions triggered the loop,” said Murillo yesterday, today and tomorrow in an on-going interview. “but we are advising the whole country to pay attention to variations in this nationwide déjà vu that could lead to advancing the plot.”

According to Murillo, Costa Rica normally exists in 4 states of time: ahora, ahorita, luego, and luego-luego, but the temporal disruption has thrust the entire country into a perpetual state of ya that few people have even
noticed.

“I was staring down at my casado the other day when it hit me. I’d also had rice and beans for breakfast that day, and for lunch the day before.” said Murillo.

His hypothesis was further supported when Murillo noted that all around him ticos were having the same conversations over and over about the weather and the correct use of the word American. He added that the number one movie in the country is Fast and the Furious for the 408th week in a row.

“And I mean, can anyone remember a time when Turrialba wasn’t erupting?”

Similar reports have since surfaced from all over the country. Pete, a grimy beach-dwelling gringo currently residing in Sámara, told el Peji that he recently came to realisation that he’s been living the same day again and again.

“It’s like, I’m trapped in this day, man,” said Pete. “It’s always the same: drinking imperials, skipping my TEFL classes, getting high, and then passing out in the sand. I can’t really remember anything since I got off the bus – might have been a week or 3 years ago –and I can’t imagine doing anything differently tomorrow.”

President Solis told el Peji that he would make an official statement regarding the time loop as soon as he finishes giving yet another speech about la reforma tributaria.

More study is needed, but Dr. Murillo intends to find a way to break the cycle. In addition to experimenting with variations in routine, he is working with Franklin Chang on a flux capacitor that may one day allow him to travel outside of the temporal loop.

“We’ll need about 1.21 gigawatts of power, so we’re going to have to wait hasta que se caen los rayos in the rainy season,” said Murillo. “but we’ll have the machine up and running ahorita, maybe mañana.”