SAN JOSE – Traffic slowed to a halt in downtown San José today as drunk and slovenly dressed gringos took to the street to celebrate Costa Rica’s designation by think-tank Transient International as the world’s top refuge for expats fleeing seedy pasts to dodge arrest warrants and indulge in the excesses of sex, drugs and, well, marimbas.

“It’s not often that Costa Rica is ranked number one in the world at anything, and we could not be prouder to be recognized for the sordid, shadowy community of expats we have willfully given asylum to over the years,” said Culture Minister Sylvie Duran at a press conference held in the casino of San Jose’s Hotel Del Rey. “It’s a reminder to the international community that, if you are looking to have an affair, easily obtain illicit drugs or change your name to avoid the law, come to Costa Rica!”

The study conducted by the Geneva, Switzerland-based research group found that Costa Rica has the world’s largest population of “fat, Hawaiian shirt wearing, pill-drunk expat slobs,” narrowly edging out Thailand and the Dominican Republic. The Central American nation was also rated the world’s top destination for 23-year old expats pretending to learn Spanish, dabble in Yoga, or teach subpar English to locals for six to eight months before returning h 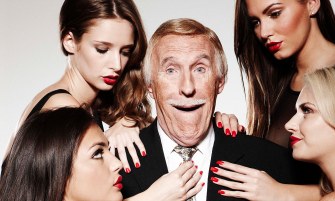 ome to live with their parents.

“I’m much happier here than I ever was in Mississip, uh, I mean Michigan,” said Chaz PureLife, a U.S. expat employed at a cocaine-fueled SportsBook in the basement of Mall San Pedro. “As long as I travel with my fake passport, I have no problem avoiding Interpol in the U.S. and always get back into Costa Rica with a fake itinerary I update in Microsoft Paint.”

After word of the news reached the Pacific coast beach town of Jacó, local establishments the Beatle Bar, Hotel Cocal and Le Loft offered free drinks all day to expats with proof of an outstanding arrest warrant in another country, according to a posting in a local Facebook group. Escort services also offered temporary 2-for-1 deals to men exceeding 300 pounds and dressed in Hawaiian or Imperial beer t-shirts, according to local tourism site http://www.grimygringos.org.