Rio de Janeiro —  In an effort to combat the spread of the mosquito-borne Zika virus prior to hosting the Olympic games in August, Brazil President Dilma Rousseff has announced plans to douse the entire country with a giant can of “OFF” repellent to control the disease’s outbreak across the South American nation.

A fleet of Brazilian military helicopters will be deployed to sustain the 24-ton can of the world’s most popular insect repellent as it soakes the nation from the skies, Rousseff said at a press conference in Rio de Janeiro. News of the countrywide spraying follows the President’s recent announcement that soldiers will go to door-to-door across the country to “take the fight to mosquitos” and distribute bars of “ZOFF” soap, or Zika-OFF, in an effort to get residents to use the repellent-scented lather when bathing.

“With repellent falling from the sky and soldiers taking the fight to mosquitos on the ground, we’re covered from all angles!” Rousseff yelled triumphantly, while donning her famed ‘Zika Zero’ shirt. Members of the military then demonstrated how they would attack the mosquitos in residents’ homes, using a series of chokeholds, capoeira kicks and impressive acrobatics.

The unpopular President, who has been embroiled in a series of corruption controversies the past year that have tarnished the country’s reputation, encouraged citizens to mobilize against the virus on social media using the hashtags #ZikaZero and #Igot99problemsbutzikaaintone.

“If everyone is mobilized, a mosquito isn’t stronger than our entire country. It’s not like we’re going against the German soccer team,” she said poking fun at the country’s 7-1 annihilation in the 2014 World Cup. 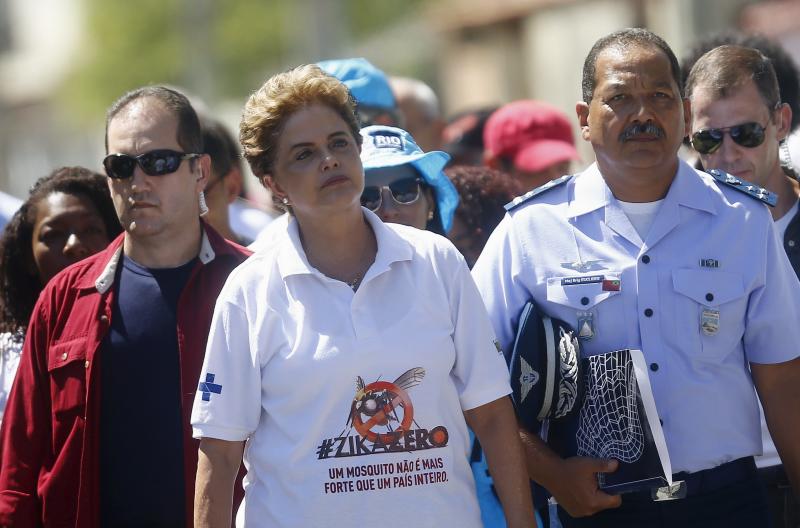 Asserting that social media is the most powerful tool at Brazil’s disposal to combat the pesky mosquitos after old-fashioned sword duels and bribes, Rousseff admitted that the virus was also behind the country’s mysterious shut-down of popular texting application WhatsApp late last year.

“We suspected the mosquitos were mobilizing through WhatsApp, and tried to cut them off at the source. It didn’t work out the way we’d hoped,” she said.

The government is also encouraging the use of full body condoms to combat Zika, after it was revealed in recent weeks that the disease was sexually transmissible, the President said. Given the sexually charged reputation of Rio de Janeiro, Durex has manufactured prototypes of “Love Gloves” to be distributed at the Olympics, which are body-sized condoms donning the colors of the Brazilian flag.

Rousseff showed clips from 1988 film “Naked Gun” to demonstrate how the full body “capas” should work in practice.

“We have a booming economy, an honest, admired government and fantastic currency,” Rousseff said. “The last thing we need is some maldito mosquito coming in here and messing things up.”