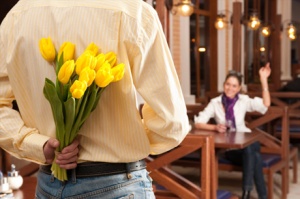 CHEPE — After going on four successful dates so far today, exhausted Zapote resident Angel Hernandez has stopped in at home to recharge his mental and cellphone batteries before venturing out to meet a fifth different guila.

Hernandez, a 25-year-old unemployed entrepreneur, had been choreographing today’s agenda since last year’s day of amor. In an attempt to surpass his personal best of four dates in 2013, Hernandez lined-up five citas this year.

“I thought last year was tough,” he said as he stood in his bathroom re-axing the strike zone and covering his head in gel. “But I’ve always been someone to challenge myself, whether it’s winning a Futbol 5 title, completing another quest on World of Warcraft or fitting into skinny jeans. Going for five in ’14 was just the logical conclusion.”

The first date started at 8a.m. this morning when Hernandez took 21-year-old Melissa Brenes for breakfast at an AMPM in La California. As they waited for their pre-wrapped sandwiches and Arizona Iced Tea, Hernandez presented her with an assortment of flowers he’d picked from his neighbor’s garden.

“The flowers were so unexpected,” the UCR human relations major said. “All the guys I usually go out with just invite themselves over to my place to watch a movie. It was nice to have an outing.”

Shortly after 10:30a.m. the two finished their last mamones and parted ways. Hernandez then hopped on his skateboard, smoked some mota and headed to Musmanni in Paseo Colon where he bravely conducted dates two and three.

The first of the back-to-back was with 31-year-old mother of three Silvia Nuñez. Bringing her children on the date, Hernandez said they never really got a chance to connect. “The kids just ran around and were totally distracting,” he said as he catcalled other women walking by. “I couldn’t help but think she doesn’t have her life together.”

His date with Karla Badilla, a 45-year-old former La Teja model, was no better. Married for 20 years, Badilla spent the entire date on the phone discussing anniversary plans with her husband.

Unfazed by the mounting pressure to break the record after date three, Hernandez smoked two more joints and coolly remembered to change his relationship status on Facebook in between women. Further building his legend, while Badilla was paying the bill, he managed to tweet #striveforfivestillalive and #halfwayhome, which immediately started trending on social media as the country kept track of the record-breaking attempt.

Social networks almost came back to bite Hernandez on his fourth date. While with ex-Combate contestant Angela Lorenza at Soda Montealegre in Los Yoses, she came across an Instagram photo of Hernandez alongside Brenes from earlier in the day.

“That was a close one, mae,” Hernandez recounted. “But I just told her how she was the only one for me, bought her another jamón con queso, and everything was tuanis.”

Not wanting to slip up again, he stopped off at home around 5p.m. to regroup before his record breaking date at Mall San Pedro.

“If I pull this one off, there’s no telling where the limit is. The future is really bright,” Hernandez said as he left the house and kissed him mom goodbye. Minutes later he tweeted a picture from the mall food court with hashtag #recordbreakingtime.