Sea Shepherd Paul Watson among those in uproar over attack 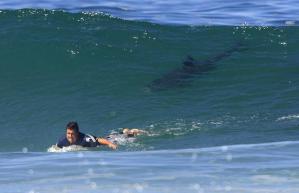 In his first trip to Costa Rica, Newberry, an avid traveler and surfer, hit the Jaco Beach waves early last Thursday to catch the morning break. After riding a few waves, Newberry said he spotted a silvery fin emerge from the water near the foot of his board.

“Everything was pretty Pura Vida up to that point, ya know,” Newberry said in a phone interview. “But then I saw that fin poking above the water and thought, ‘Oh shit!  We’re bait, dude!'”

According to Newberry, the suspected man-eater began circling a group of six or seven surfers about 30 meters from the shoreline. When the shark’s fin turned and appeared to be approaching Newberry directly, it was a kill or be killed moment, he said.

“I slid off my board, focused on that bad boy comin’ at me, and instincts took over, man,” he said. “I grabbed that sucker’s head and bit his fin like I was Mike Tyson.”

The ensuing struggle was witnessed from shore as dozens of tourists and locals gathered to watch the melee. Clouds of blood formed in the water though onlookers had a sense Newberry was holding his own as shouts of “take that flipper” and “you taste like chicken” could be heard during the throes of the battle.

“It was like watching a piranha and a chihuahua in a bathtub,” said witness Katarina Campos. “I didn’t know who was winning or losing, but it was far cooler than any UFC fight I’ve ever seen.”

After approximately 30 minutes, the splashing stopped and the struggle came to a close. Newberry was then filmed dragging the carcass of the 16-foot animal to shore and yelling “Gringo One, Jaws Zero!” and shot-gunning a beer.

The videos have since circulated online and caught the attention of several activist groups, including famed Captain Paul Watson, known as the Sea Sheppard, and the World Wildlife Fund.

“We are studying this attack very closely, and intend to pursue Mr. Newberry with due vigor,” Watson said in a phone interview. “Costa Rica has long been staining international waters with shark blood, and this appears to be an escalation we did not anticipate.”

Watson also said Newberry should “take on someone his own size” and issued an international bounty on the head of the “Jersey shark murderer.”

Newberry has since returned to New Jersey and refused further comment on advice of his attorney. The incident is the first recorded shark death via human bite in Costa Rican history.