UN applauds country for pretending to be aggressive sometimes 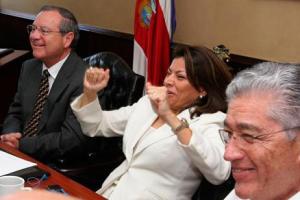 SAN JOSE – Days after celebrating the 65th anniversary of the abolition of its military, Costa Rica was voted the world’s third most powerful army-less nation, according to a United Nations study.

Costa Rica surged ahead in the world rankings this year due to its ferocious stance against Nicaragua over a meaningless piece of land no one cares about and the successes of female boxer Hannah Gabriel, the UN said.

“By pretending to be aggressive and talking about improving border security along the Nicaraguan border, Costa Rica proved it is an army-less nation capable of fierce hissy-fits,” the report said. “No country in its right mind would want to engage in a 3-year legal battle at the International Court of Justice with the mighty Ticos.”

Costa Rica leapfrogged Micronesia and now trails only Iceland and the Vatican City in the army-less power rankings. The UN said that the improved ranking was also based on the assumption that Hannah Gabriel could single-handedly beat up 87.3 percent of all Micronesians.

While the Ticos’ ranking was improved, the UN subtracted points from the country’s ranking due to its impossible draw in the FIFA World Cup and the fact that only three bar fights were recorded in the entire country in 2013, including an all-male slap-fight at Puchos in February. The death of Pocho the crocodile in 2011 also continues to weaken Costa Rica’s overall standing, the report said.

“We are pleased with the rankings though know the only way to international respect is to continue to engage in petty diplomatic arguments of complete insignificance,” a statement from the Foreign Ministry said after the UN rankings were released. “We assure you that Laura Chinchilla’s government is committed to doing just that during its final months in office.”